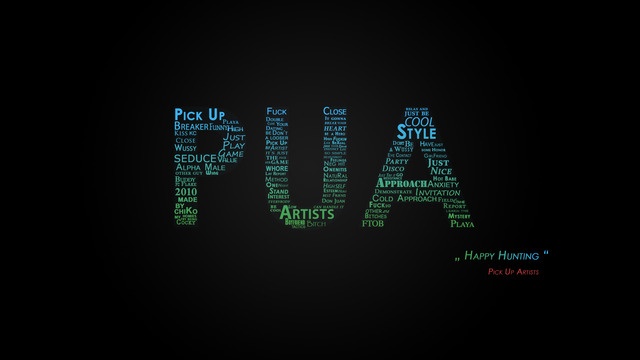 In the previous weeks, we gave you AlphaWolf, Chi Szeto and Fluffy McGee.

This week we give you Fred PUA. Real name Fred Fang and premier Pick Up Artist from Taiwan.

What life experience made you decide that you would like to be a PUA?

It is a long story that I had a broken out relation with one of my ex-girlfriends.

I still remember the girl I was dating at the time, she was the sister of one of my students when I worked as a dance instructor. Through courage and persistence, I was finally able to be physically intimate with her after many tries. We dated for three years, and during this time I was completely devoted to her and my work. She was the love of my life at the time and I had plans to marry her. However, things did not go as I had planned. She dumped me. We got into an argument over something trivial one morning, something I don’t even now remember, and she called it quits. She moved out of the apartment that we shared and disappeared. I never saw her again after that.

I had no dating routines or skills. Everything I knew at the time about dating was learned from friends talking about the girls in their lives. Through sheer luck and boldness, I was able to bed an unattractive Japanese girl. Before this encounter and my ex-girlfriend, I had countless failures in my effort to meet and date any girls. I was what I know now called, an AFC, abbreviated for the Average Frustrated Chump. Having no other social outlets to meet the opposite sex, I focused on the girls I went to school with, or friends of friends within my immediate social circle. However, my efforts were still disastrous with no results. Going on dates with a new girl were very intimidating and mysterious to me and I did not know how to carry myself. I was always very nervous, shy, and did not know what to say or do while on a date. I very much admired the guy friends around me who were constantly meeting and dating new girls with ease. I had believed that money and looks were everything when it comes to attracting and mating with the opposite sex. Needless to say, I was deeply disappointed with myself. Finally at the end of my three-year relationship at the age of 27, I did some soul searching and reflected on my past failures with women. I had decided that I wanted to become a pickup artist. I would devote all my time and effort in learning about meeting and dating women in various situations; whether it is on the street, in a bar, at a party, or any social setting. My fear in approaching women slowly disappeared as I think back on my past failures. These fail experiences gave me the motivation and drive to succeed with women.

My initial attempts at pickup were less than successful. Most of the time I was turned down in my advances to meet and talk to women. But after many tries without giving up, I would be rewarded with a phone number or two. Slowly I would be able to convince these girls to go out on a date with me, only to have them flake or disappear on me without meeting them or after just one date. As I progressed to getting girls to go on dates with me, I learned to become less nervous and shy and began to learn about ways to talk to them. I learned about conversation skills that women enjoyed and what qualities they find in an attractive man. Moving beyond conversation, I learned about body language and how to physically escalate with a woman to the point of becoming sexual. From there, I learned how to turn a woman on sexually and how to be a skillful lover in bed. It’s been almost seven years now since I devoted myself fulltime to learning about the art of pickup. Within this time period, I’ve come to love and appreciate women for all their qualities and uniqueness. My fear and sometimes disdain for women have completely disappeared over time. I’ve learned a great deal about women and from women, and I’m very grateful.

I had decided to become a PUA, not only for myself, but also to help more people with no game with the HBs (Hot Babes).

How did your female friends react when they knew that you were a PUA?

Most of them were surprised about my PUA job, and they were curious about it. They always asked me to help their guy friends for getting a girl them like. Besides, I do not really have many female friends.

If you kept count of the women you have already picked up, how many would there be by now?

It has been almost 7 years I have been training for this, that will be too many to count. Generally I had about more than 100 thousands approaches, and about 40~60% of them I got the followed up all the way till the end.

What’s the shortest time it took you to pick up a woman?

The shortest time for me is spending only 3 seconds to get T-close, and 1 minute to take her home. Of course it depends on the situation and environment for that [speed].

What makes you stand out from the rest?

I have been doing the PUA training over and over again day by day. I have met every single PUA I can in my life. I always try very hard to improve myself and push my limit. It will be the effort I have been putting and all the experience to make me stand out from the rest.

Any particular strategy that is unique to you?

Some PUAs pretend to be gays to approach the HBs, and guard down their security for men. I think it is still unique to me.

What is the major difference of PUAs in Asia and the USA?

What strategies work in Asia and what works for the USA? Are there strategies in Asia that doesn’t work in the USA? And vice versa?

“Neg” (negative hits) is a very good strategy to use in Asia, but you have to be careful about the level of the “Neg” you use. The HBs might sometimes feel insult[ed] by that, so always start “Neg” from a little thing, like “your hair is funny, I have seemed so many ordinary girls have that hairstyle like you”. You don’t criticize too much about their characters or make too much fun of their family. Trust me, they are easy to get pissed off.

“Kino” is working perfectly in USA. HBs like to be touched gently and nicely. You can easily go kino escalating in USA, and get a k-close in any place you like. It’s never easy to be done in Asia.

In Asia you don’t give a compliment to HBs. Otherwise, they will think you are trying too hard, and start to lose interests on you. However, in USA you do need to give a compliment, and the HBs are generally happy and [reacts well] to you.

Is there a universal strategy that works for all PUAs?

Big smooth approaching, a big smile, giving a loud and clear greeting word “Hi”. Once she stops, then there is your chance for it.

As a PUA, did you feel like you missed out on something? Like the thrills of a challenges when courting a girl rather than picking her up? The excitement of knowing whether your relationship will last the long run or not?

As a PUA, I only follow the PUA rules and all the routines to get the HB, so that I would not spend too much time for the HB, and that includes picking up and dating time. If I put more time for some of them, I feel that I might be able to handle them.

If you were not a PUA, what would you be?

I would be an ordinary guy, working in an office. My life would also be as boring as hell I guess.

Check back in our blog next week for more on the top 10 Asian pick up artists to watch out for.